What Is The Success Rate of TMS Therapy?

Most TMS providers find that TMS has a success rate at between 70% or 80%, meaning that the vast majority of individuals find significant relief after treatment. About 50% of people experience complete remission, meaning that the symptoms of depression are absent after just one course of treatment.

To understand how successful TMS is, it’s important to understand just how successful medication is. A large clinical study funded by the NIMH called the STAR*D study found that commonly prescribed medications, such as Selective Serotonin Reuptake Inhibitors (SSRIs), are only successful 27.5% of the time. However, if the SSRI doesn’t work (as is the case for many individuals with treatment-resistant depression), the success rate for medication decreases. By the time an individual tries 4 medications, the success rate for the next medication working is less than 7%. We know that medication trials can take 1-2 months to even gauge whether or not a particular antidepressant may work for a patient. This means that many individuals spend 4-8 months trying different medications when the probability of remission is almost negligible. Not to mention, increased medications mean that there is an increased risk for negative side-effects from medications, such as: 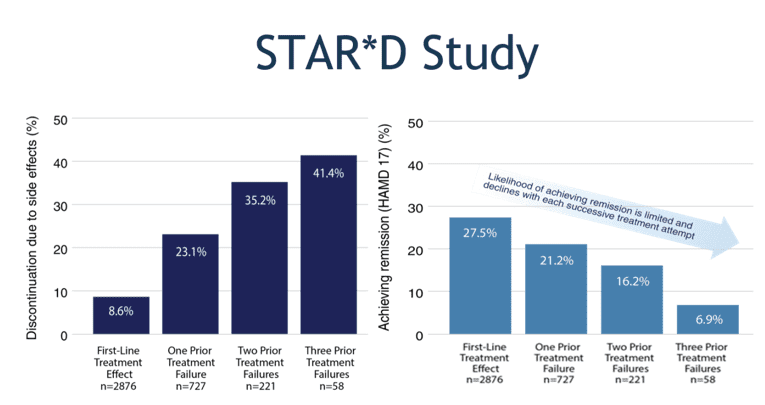 This background makes it clear that people suffering from treatment-resistant depression need other options. Much of the original clinical research using TMS looked at these individuals with very low likelihood of remission, and found that two-thirds of patient tended to have a successful experience after TMS. Researchers found that individuals who had felt hopeless, suffered from anhedonia, and who had exhausted all other options were able to become free of their symptoms in just 6 weeks.

We did some independent research in mid-2020 and found that our success rate was substantially higher than what was originally published. This may be due to the fact that we specialize in both theta burst stimulation and a personalized approach to TMS. We believe that every brain is different, and there’s no “one size fits all” approach to Transcranial Magnetic Stimulation treatment. Our last calculation gave us a success rate of 92.5%.

If you are seeking a treatment for depression that actually works, please contact us today at (833) 867-2329 to learn how to change your life.