There has been increasing confusion regarding the specific types of TMS and rTMS. This article will serve to briefly clarify what TMS is, how it works, and how different types of machines (called Transcranial Magnetic Stimulators) compare.

The most important thing to know at this point is that Transcranial Magnetic Stimulators first came about in 1985 as a method to research healthy motor pathways in the brain. A few years later, convergent literature on brain scans and depression came to light and scientists began to understand that specific parts of the brain, including the left dorsolateral prefrontal cortex, were underactive in various types of depression. In 1995, a number of researchers decided to place the magnetic stimulator on the left dorsolateral prefrontal cortex, in hopes that increased neural activity would coincide with an increase in mood. They were right, and their patients were less depressed within the week. 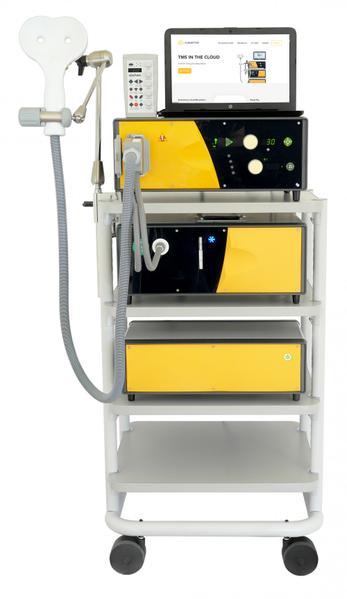 It took 13 years and hundreds of clinical trials for TMS to become FDA approved in the United States. The first Transcranial Magnetic Stimulator was created by Neuronetics Inc, and it is called NeuroStar. NeuroStar is a great quality machine, and in general, they have the most recognition among patients and practitioners alike, thanks to commercials like these where individuals are told to “ask for NeuroStar by name.” NeuroStar is the first of many Surface TMS machines, meaning that they stimulate the outer cortex of the brain. Some people also refer to Surface TMS as “rTMS,” which is a bit of a misnomer. Repetitive TMS (rTMS) only means more than one pulse per session, of which all TMS machines that treat depression are. So, NeuroStar is both the first rTMS machine and Surface TMS machine. In 2008, the FDA indication was for the magnetic stimulators to pulse at a 10 Hz frequency for 37.5 minutes (including breaks).

The second machine to become approved by the FDA was manufactured by an Israeli company called Brainsway. Brainsway claimed that their machines reach deeper brain structures than NeuroStar. Brainsway stimulators use a large helmet that is placed on an individual’s head during the whole session. Deep TMS is technically only theoretical, as it has not has been proven that the Brainsway machines actually hit a deeper portion of the brain. However, Brainsway’s own spherical models predict that their Deep TMS devices reach structures 0.7 centimeters deeper than other machines. One of the big advantages initially for using Brainsway machines was that the treatment length was shorter, administered in only 20 minutes compared to 37.5 minutes for other TMS machines. This new protocol allowed physicians to decrease the inter-stimulation interval by about half so that the treatment could be done in almost half the time. On the internet, people routinely ask questions comparing Deep TMS to rTMS, which is not accurate! Deep TMS is a type of rTMS.

Some studies do show that Deep TMS has higher efficacy, most likely because the Brainsway machine stimulates a much larger portion of the brain. In an independent study published in The Journal of Neuropsychiatry and Clinical Neurosciences, Lonergan et al. (2017) compared patient and technician attitudes on Deep TMS and Surface TMS devices. Not only did real patients report a greater decrease in depressive symptoms from Surface TMS compared to Deep TMS, but patients also reported significantly more confidence in Surface TMS devices. Similarly, practitioners for both devices reported that Surface TMS devices have fewer side-effects than Deep TMS, and thus, they are more likely to recommend Surface TMS over Deep TMS. While Deep TMS is a great option, the two biggest flaws are that 1) it is associated with more side-effects and 2) it allows for less flexibility and personalized treatment due to the shape of the stimulator.

Some TMS clinics may send you to get a functional MRI prior to beginning treatment. In this case, the hope is that the brain scan will tell the doctor exactly where to place the stimulator on the scalp in order to reach the left dorsolateral prefrontal cortex. This method has somewhat fallen out of favor as it doesn’t seem to make any significant difference in efficacy compared to the current consensus algorithm for locating the spot. The prefrontal cortex is actually one of the largest portions of the brain, so there is quite a bit more room for error than originally thought back in 2008. The MRI itself can be quite costly, time-consuming, and uncomfortable. In our Los Angeles clinic, we use the “Adjusted Beam F3” algorithm, which is a highly accurate method that involves making a series of measurements around the patient’s head in order to find the exact stimulation location.

Theta Burst Stimulation, which tends to be referred to as either Express TMS or TBS interchangeably, is one of our favorite types of treatment. In TBS, the stimulator pulses at a specific frequency that mimics ones’ own brainwaves, enabling the brain to increase neuroplasticity up to 10 times faster than traditional TMS. While a TMS protocol used to take 37.5 minutes, theta burst stimulation gets the exact same results in just 3 minutes. Theta burst was FDA-cleared in 2018 after it was shown that both the efficacy and side-effect profiles were the same as standard 10 Hz rTMS treatment. Asides from increased accessibility, we prefer theta burst because it seems to be a universal signal for the brain to engage and increase neuroplasticity. Older TMS protocols (e.g., 10 Hz treatment), have a lot of individual variabilities: it is an excitatory stimulus for patients, in that it will increase activity, but it can also be an inhibitory stimulus for other people, meaning that a certain subset of people can actually get worse after traditional TMS treatment. Theta Burst Stimulation can avoid that limitation, and is generally considered to be the most scientifically advanced of all of the different types of TMS. A few studies have come out which have tried administering multiple sessions of TBS in one day (e.g., 5 sessions per day over 6 days), which is called Accelerated TMS. However, the jury is still out on whether this is more or less effective than the standard 6-week course.